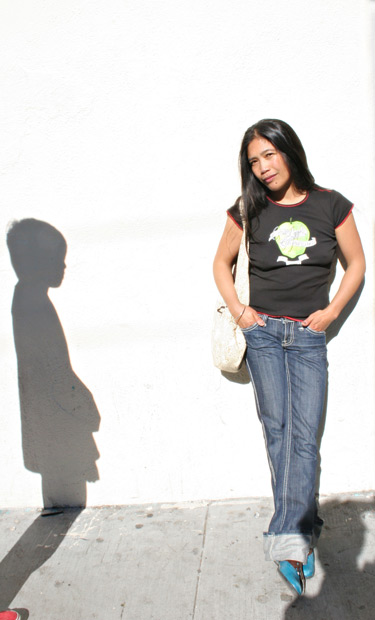 During the 1990’s, highly-acclaimed choreographer/cultural activist pearl ubungen’s investigations of place/site/memory re-invigorated the field of community-based arts, re-negotiated the critical space between social activism and art making and placed cross-cultural, intergenerational work at the center of the art-making process. A native of San Francisco and fourth generation Pilipina American, ubungen is an interdisciplinary artist who attributes much of her creative life force to the subtle energies and influences of San Francisco.

Ms. ubungen’s early works reflected on race/ethnicity, working class struggle, immigration, gentrification and diaspora. Her creative process has been informed by her academic training in history and enlivened by research and practice in critical theory,embodiment,and community engagement.

As the recipient of many commissions and awards, ubungen toured nationally and internationally with her former company Pearl Ubungen Dancers and Musicians (PUD&M). Her groundbreaking work with communities originated in San Francisco’s Tenderloin and South of Market neighborhoods and expanded to many diverse locations including the Frogtown neighbhorhood in St. Paul, Minnesota as part of ubungen’s McKnight National Fellowship in Dance and to Sheboygan, Wisconsin where she worked for over two years with the Hmong, Mexican American and Dutch and German communities, commissioned by the Kohler Arts Center through the Lila Wallace-Reader’s Digest Arts Partners Program.

In addition to her training in the arts, Ms. Ubungen has been a practitioner of meditation in the Shambhala Buddhist tradition since 1989. She is a vajrayana student of Sakyong Mipham Rinpoche, lineage holder of Shambhala Buddhism. Ms. ubungen is an authorized  Director of Shambhala Training and meditation instructor. Her art making/performance projects are infused with the view and practice of the dharma. She is also a practitioner of the Feldenkrais Method and has been refining/articulating language to describe the interconnectedness of body/mind somatic work and formal meditation practices.

From 2002-2006, ubungen designed and implemented a BFA in Performance at Naropa University in Boulder, Colorado. The innovative curriculum centered critical theory and cultural studies while integrating conservatory-style training in dance, theater and voice with meditation and contemplative practices.  Ms. ubungen continues to evolve an embodied artistic praxis (Diamante) that intertwines the view and practice of meditation with improvisation and composition. ubungen is desirous to find/create/support balance between academic rigor, textuality and extremes of “higher” education with the provocation of lively embodied practices and broader questions of access, mobility/fluidity, and the infrastructure of the built environment.  Ms. ubungen directs West Coast Performance Works, a collaborative, project-based group that revels in the interstitial, drawing from San Francisco’s radical heritage of innovation, counterculture and diversity.